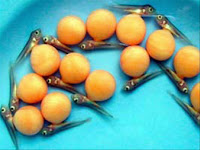 The Golden Arowana is the most popular and expensive ornamental fish native to Malaysia. The best quality is the crossed-back full scale Arowana is the Malaysian Golden Arowana. This variety only occurs in Bukit Merah Lake in the state of Perak, Malaysia. In its natural habitat breeding season normally occurs from August to October every year. During the season village folk from around the lake will try to collect the valuable fry at night.

There are two varieties of arowana that commonly inhabit Malaysian water bodies; a golden variety and a green variety. The green variety is more common and less expensive compared to the golden variety, which sells at a premium. The crossed-back Golden Arowana commonly inhabits the Kerian River and its tributaries in Perak. In its natural habitat the fish prefer slightly acidic clean water and unpolluted natural surroundings, especially shallow and fast flowing rivers with overhanging vegetation on the river bank.

Due the high price of the golden variety the Freshwater Fisheries Research Station (FFRC) started with a few individuals of the wild catch for brood stock. The wild fish were acquired from traditional fish collectors at Bukit Merah Lake in 1990. In 1996 FFRC was fortunate to successfully breed the Malaysian Golden Arowana in concrete tanks on the first attempt.

Eight pieces of Malaysian Golden Dragon were reared in a bare-based concrete tank measuring 5 x 5 meters with a water depth about 0.5 meters fenced with plastic netting about 0.75 meters high to prevent the fish from jumping out. A spawning room was built in one corner of the concrete tank and some pieces of bogwood were added to help create a natural living environment for the fish. Other decorations such as pebbles and stones were avoided because they may injure the fish and be swallowed accidentally during feeding. The rearing tank was partially shaded, away from direct sunlight and built in a quiet area. The broodstock were maintained in the rearing tank until the fish reached maturity.

Although the arowana is a hardy fish the quality of water should correspond to the pH of water in its natural habitat when reared in concrete tanks. The pH of water in the rearing tank should be maintained between 6.8 - 7.5 and 27 - 29°C. Water was partially changed at about 30 - 35% of total volume and topped up with dechlorinated tap water. The water depth was maintained at about 0.5 - 0.75 meters.

Broodstock were fed a variety of food. A balanced diet is very important in helping fish to mature and spawn. The daily diet should be diverse and contain a high protein content. The fish were fed daily with meat-based live food such as wild guppy, freshwater prawn (Macrobrachium lanchestrii), low grade goldfish and chopped fish meat. Pellet feed containing 32% crude protein was also given as supplementary food. Total amount of food provided was approximately 2% of total body weight per day.

The fish attain first maturity from around the 4th year onwards at which point they measure between 45-60cm in total length. The fish spawn throughout the year with the peak season occurring between July and December. In the wild the male incubates the fertilised eggs in its mouth cavity until the fry are free swimming after about 2 months.

Female arowana have been reported to have a single ovary which contains around 20 - 30 large ova approximately 1.9cm in diameter. Our observations made by dissecting dead mature arowana reared in earthen ponds and obtained from private hatchery confirm the single ovary. However, we found around 50 - 60 ova at different stages of maturity. The mature male arowana also possess single thread-like testis.

There are no obvious sexual differences in juvenile fish. These become apparent after maturity is reached at about 3-4 years of age.

Determination of sex is based on the body shape and the size of the mouth cavity. Male fish have a slimmer and shallower body depth, a bigger mouth and more intense colour then the females. The larger mouth and deeper lower jaw in males are for egg incubating purposes. The size of the males' head is relatively bigger. Male fish normally seem more aggressive and lead in competing for food.

The arowana shows very unique behaviour during courtship. Courtship takes place from several weeks to months before the pair starts to mate. The courtship sequences usually are observed at night when the fish tend to swim closer to the water surface. The male chases the female around the perimeter of the tank and sometimes the pair circle each other nose-to-tail. About one to two weeks before spawning takes place, the fish swim side by side with their bodies touching. Eventually the female releases a cluster of orange-red eggs.

The male fertilises the eggs and then scoops them into its mouth where it incubates them until the fry can swim and survive independently. The eggs are about 8 -10 mm in diameter and rich with yolk and hatch about one week after fertilisation. After hatching, the young larvae continue to live in the male's mouth for a further 7 - 8 weeks until the yolk sac is totally absorbed. The fry leave the mouth and become independent when they reach about 4550mm.

After mating a brooding male can be identified by a distended operculum and its swimming behaviour. They don't seem to feed and look more placid than at other times. A brooding male can also be recognised by a remarkable brood pouch located at the underside of its mouth.

The incubation period (time from fertilisation until the fry are released) is normally about 8 weeks. To shorten the period the fertilised eggs can be hand removed from the male's mouth on the 30th day after spawning. The brooding male should be carefully caught with a fine net and covered with a wet cotton towel to avoid injury and struggling.

The lower jaw of the fish is pulled backward slowly and the body is shaken slightly to release the half developed larvae from the male's mouth. The larvae are collected in a plastic basin and incubated in an aquarium. The number of the fertilised eggs collected in a single brood is usually about 20 - 35 larvae.


Larvae removed from the male's mouth

Once removed from the male's mouth, the half-developed larvae are incubated in glass aquarium tanks, measuring 90 x 45 x 45 cm. Water temperature is kept around 27 - 29°C using a thermostat heater and dissolved oxygen is maintained at about 5 ppm (mg/l) through continuous gentle aeration of the water. We generally add about 2 ppm of Acriflavine solution to the water to prevent infection of any injuries suffered by the larvae during handling. Using this in vitro hatching technique, the survival rate to free swimming stage is generally about 90 - 100%.

During the first few weeks when the larvae still have a large yolk sac, they tend to remain at the bottom of the tank most of the time. The fry start to swim upward periodically when the yolk sac becomes smaller. On the 8th week the yolk sac is nearly fully absorbed and the fry start to swim horizontally. At this stage the first live food should be given to the fry. The yolk sac is fully absorbed and the fry become free- swimming at about 8.5cm in length.

During the incubation period the fry do not need to be fed. The fry will swim freely on the 7th week. Supplementary external live feed such as young guppys or bloodworm can be given at the early free-swimming stage to prevent the fry from attacking each other. The fry are very vigorous feeders and should be provided with ample supply of feed. We recommend a partial water change of about 30% of total tank volume every 2- 3 days to maintain water quality.

Bigger fry of about 10 -12cm in length can be fed with freshwater prawn or chopped fish meat to accelerate their growth rate. At 4 months in age we rear fingerlings individually in 75 x 45 x 45cm aquariums to avoid physical defects from fighting with siblings. To enhance the colour and promote the formation of chromatophores we suggest to illuminate with artificial lighting at least 10 -12 hours a day. After 6 -7 months of free-swimming the fry measure about 20 -25cm in length and are suitable for market.

We found few problems in maintenance of brood stock. All our fish were healthy, but common diseases such as fin rot, cloudy eye and infection of anchor worm (Lernaea) can occur especially after transferring the fish during overall cleaning of tank.

We treat fish suffering from finrot with a saline bath (1% salt) or commercial medication. Some fish suffer cloudy eyes because of poor handling or from being kept for prolonged time in poor quality contaminated water. To overcome this problem partial water changes of about one third of tank volume every two or three days should be carried out until the fish fully recover. Common salt was added at every water change (1%) until the condition improved. Infection with anchor worm parasite Lernaea causes the fish to rub its body against the side of tank and lose appetite. The parasites can be removed manually and the infected fish were also treated with Diptrex® at 0.5 ppm (mg/l).

Breeding of arowana in earthen ponds is commonly practised by commercial ornamental fish farms in Malaysia. To start the business the breeding operation needs a large amount of money for the cost of capital such as buying the broodstock and building new infrastructures.

The FFRC Batu Berendam has developed a breeding technique for Arowana in enclosed concrete tanks. To start the breeding operation requires an estimated cost of around RM 150,000100,000. This is affordable by breeders in the Malaysian community and can be operated as concurrent activity for side income. The breakthrough achieved by FFRC shows that the technique is also suitable for small scale and backyard industry.

The technique was introduced to interested farmers in Malaysia through a transfer technology programme and the responses from farmers are very promising with first harvests after two years operation. This shows that the arowana seed production in concrete tank technique is workable and practical. 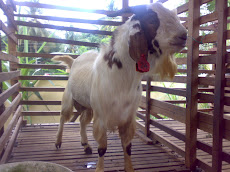